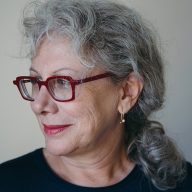 Louise Sandhaus is the former Program Director and current faculty in the Graphic Design Program at California Institute of the Arts (CalArts). Her book on the most ecstatic and distinctive California graphic design, Earthquakes, Mudslides, Fires and Riots: California and Graphic Design 1936-1986, published in late 2014 by Metropolis Books and Thames & Hudson, received laudatory attention from The New York Times, The Guardian (London), The Los Angeles Review of Books, and Eye magazine, among many others. In 2015, the book received the Palm D’argent from The International Art Book and Film Festival (FILAF). Her book on the prolific designer and American Institute of Graphic Arts (AIGA) medalist, Gere Kavanaugh, co-written and designed with Kat Catmur, was published Spring 2019 by Princeton Architectural Press. She is founder and co-director of The People’s Graphic Design Archive, a crowd-sourced virtual archive intended to preserve, expand, and diversify graphic design history.

Louise's work, writing, and writing about her work, have appeared in numerous publications including California: Designing Freedom, The Women of Design, Information Design Handbook, as well as SEGD journal, Eye, I.D., Metropolis magazines and her work is in the permanent collections of the San Francisco Museum of Modern Art and the Bibliothèque nationale de France, Paris. Louise is a former AIGA board member and former Chair of the AIGA Design Educators Community steering committee. She received an MFA in Graphic Design from California Institute of the Arts and a Graduate Laureate from the Jan Van Eyck Akademie in The Netherlands.

Building a History of Motion Design