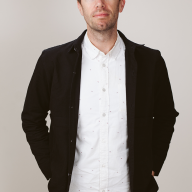 Walker has a background ranging from built environments, branding, illustration, and interaction. His work has been featured in several publications and books; was part of larger collective projects that are now in the permanent collections of the Library of Congress, MOMA, and the Brooklyn Museum; and has won several design-focused awards from organizations such as the AIGA and Communication Arts. He received his MFA in Visual Communication and Design from Virginia Commonwealth University. As an educator, he lectures on design and interaction at The University of Texas at Austin and previously taught at Washington University in Saint Louis.
On the side, he cofounded the type-focused nonprofit, Type Hike,  alongside David Rygiol. The project is a collaborative, type-focused poster project benefitting America's natural wonders, originating to celebrate the National Park Centennial.