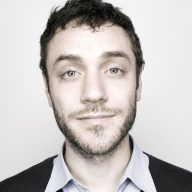 Eric Forman is a Brooklyn-based artist and designer working at the intersections between fine art, design, architecture, and new technology.  Eric started programming as a child in the 1980s and was an early member of the groundbreaking online media entity Pseudo Programs in the mid 1990s. Eric Forman Studio was founded in 2003, and in 2012 was invited to be a founding member of New Lab, a next generation innovation space in the Brooklyn Navy Yard. Eric is also the co-founder of BioArt New York, a collective pairing artists and biologists for unusual collaborations. His studio’s design practice specializes in the latest interactive experiences and fabrication techniques for diverse clients.
.
Eric received his Masters in 2002 from ITP at Tisch School of the Arts (NYU), and his B.A. from Vassar College in 1995 where he developed his own interdisciplinary program called “The Philosophical Ramifications of Computer Technology.” His thesis work there was a pioneering academic investigation of virtual reality and its potential impact on space, ontology, and identity.
.
Eric is currently faculty and Head of Innovation at the Interaction Design MFA program at SVA (School of Visual Arts). He has previously taught at the Digital+Media MFA department at RISD (Rhode Island School of Design), the Graduate School of Architecture at Columbia University, Parsons The New School for Design, the Interactive Arts MFA department at Pratt Institute, the Interdisciplinary Sculpture department of MICA (Maryland Institute College of Art), and many others. He also likes to ride a bike.