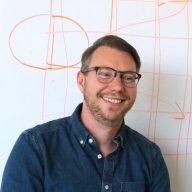 Eric Benson was born in Arizona and raised in Mid-Michigan where he later received his BFA in graphic and industrial design from the University of Michigan in 1998. He worked professionally as a UI/UX designer at Razorfish and Texas Instruments before he received his MFA in design from the University of Texas at Austin in 2006. His MFA thesis became the internationally recognized and award-winning sustainable design website www.re-nourish.org. His work with Re-nourish translated into an academic career where he currently is an Associate Professor of Graphic Design at the University of Illinois at Urbana-Champaign. His research and teaching at Illinois laid the foundation to create the Fresh Press Agri-Fiber Paper Lab. Fresh Press explores the potential of papermaking to be zero waste, environmentally sustainable, and a catalyst for a thriving local economy.
Benson has published and lectured internationally on the importance of sustainable design. His work has also garnered numerous design awards and has been seen in notable venues like The Walker Art Center, the Smithsonian Cooper Hewitt National Design Museum, the Hammer Museum, the Contemporary Arts Museum Houston, and RISD.

Systems Thinking for the Graphic Designer 101: A Toolkit for Making Positive Impact

Black Squares in the Commons

The Material is the Message