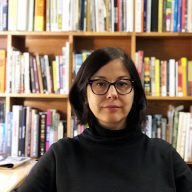 Arzu Ozkal is an internationally known interdisciplinary artist, designer, and researcher whose work focus on design’s role in looking for forms of creative and critical outcomes through participation and collaboration. She joined the School of Art and Design faculty in 2011. She has collaborated with numerous entities on campus, including the Weber Honors College, Arts Alive SDSU, and the ZIP Idea Lab, always with an eye toward encouraging student success in interdisciplinary endeavors.
Beyond SDSU, Ozkal is a founding member of Home Affairs, an interdisciplinary art collective focusing on creative projects about a range of issues impacting women’s lives. Since 2011, they have been working together with women from Turkey, Europe, and USA to design platforms of social exchange. Ozkal’s work has been exhibited nationally and internationally in Athens, Istanbul, Barcelona, Ghent, Amsterdam, Berlin, Los Angeles, New York, and beyond. Her writing has appeared in publications such as Photoworks Magazine UK, and Afterimage: The Journal of Media Arts and Cultural Criticism.